Victory Eraser (I to X)

Title One for Multiple Use

Title One for Multiple Use

Perpendicular Direction to the Horizontal Plan

Topology of the Real Line

Title Two For a Single Use

Title One for a Single Use

Potentially Out of Reach

Misappropriation of a submission call taking the shape of a scarf wore in the public space byseveral people at the same time in different locations.The copie n°1/3 was sent as our application form to the research program ‘Creation and Globalization’, Shanghai, Offshore SchoolThe two others scarves are to be worn in the same time by two people in different places.
Added Value
2017. Ceramic, coins
project realized for UN/PAIN COLLECTION on an invitation by Céline Vaché-Olivieri
1 − 2 + 3 × 4 − 5
2016. Ingraved inox ruller, double sided, 32 x 1,5 cm, unlimited edition edited by We Do Not Work Alone, Paris
>>> By placing a mathematical operator in between each number the product of this sequence once added, subtracted, multiplied and divided is equal to the actual length of the ruler: 30 cm on one side and 12 inches on the other.
Cutting Line
2016. Collage on paper, 45 x 60 cm
Les compétences à charge
2013. Stone, peanuts, wood, strap, clip 20 x 47 x 23 cm, 180 x 3 x 20 cm
Tuning Offence
2013. Sneaker, flashing led lights, electronic circuit
--/--/-----
2011; Video, 1920x1080, color, stéréo sound, 06.00
Title One for Multiple Use
2016. Solo show at Martine Aboucaya Gallery, Paris, January 30 - March 1, 2016
[ x ]
2014. x hooks n°2 and n°3, variable dimensions

Title One for Multiple Use
>> Bazar Compatible Program, Shanghai

Title One for Multiple Use
>> Martine Aboucaya Gallery Paris

Plus Une Pièce | Plus Un Multiple
>> exhibitions cycle in a storage unit of 2.5 sq.m., curated by Muriel Leray & Elsa Werth

One Minute, One Hour, One Month…One Million Years
>> The Island Club, Limassol, curated by C.Panayiotou 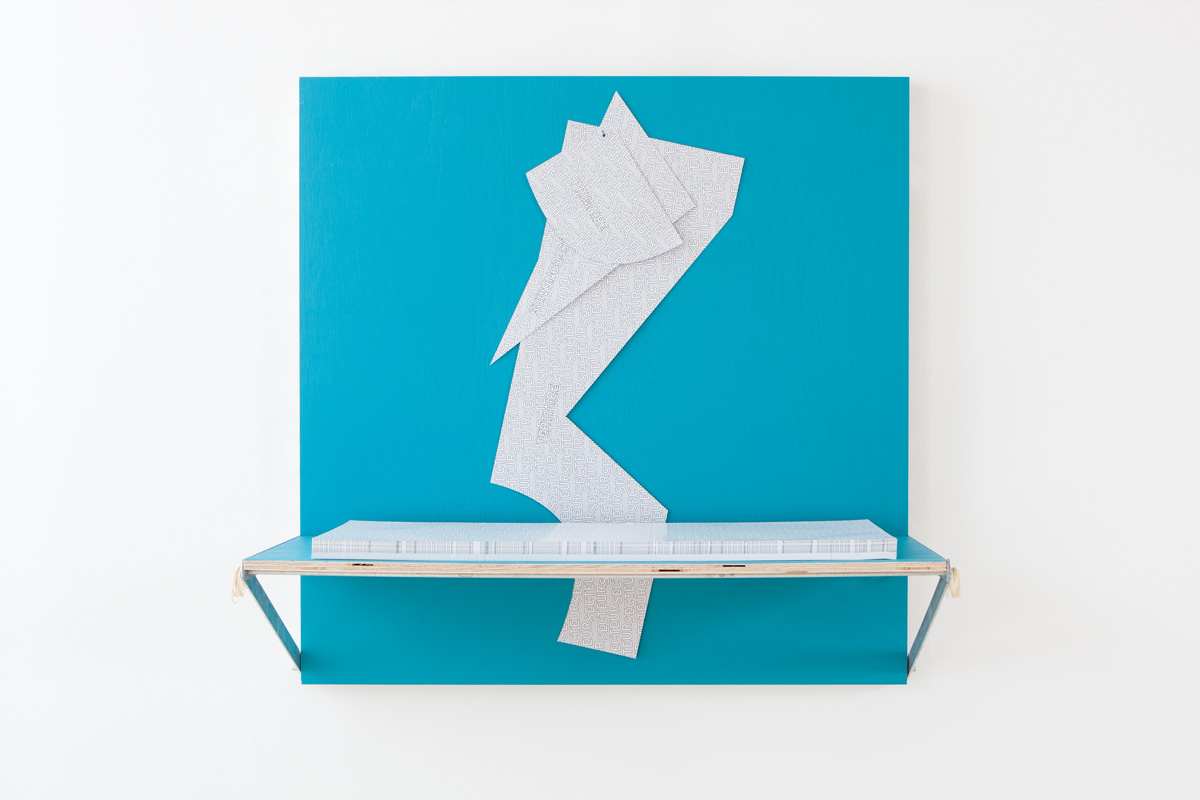 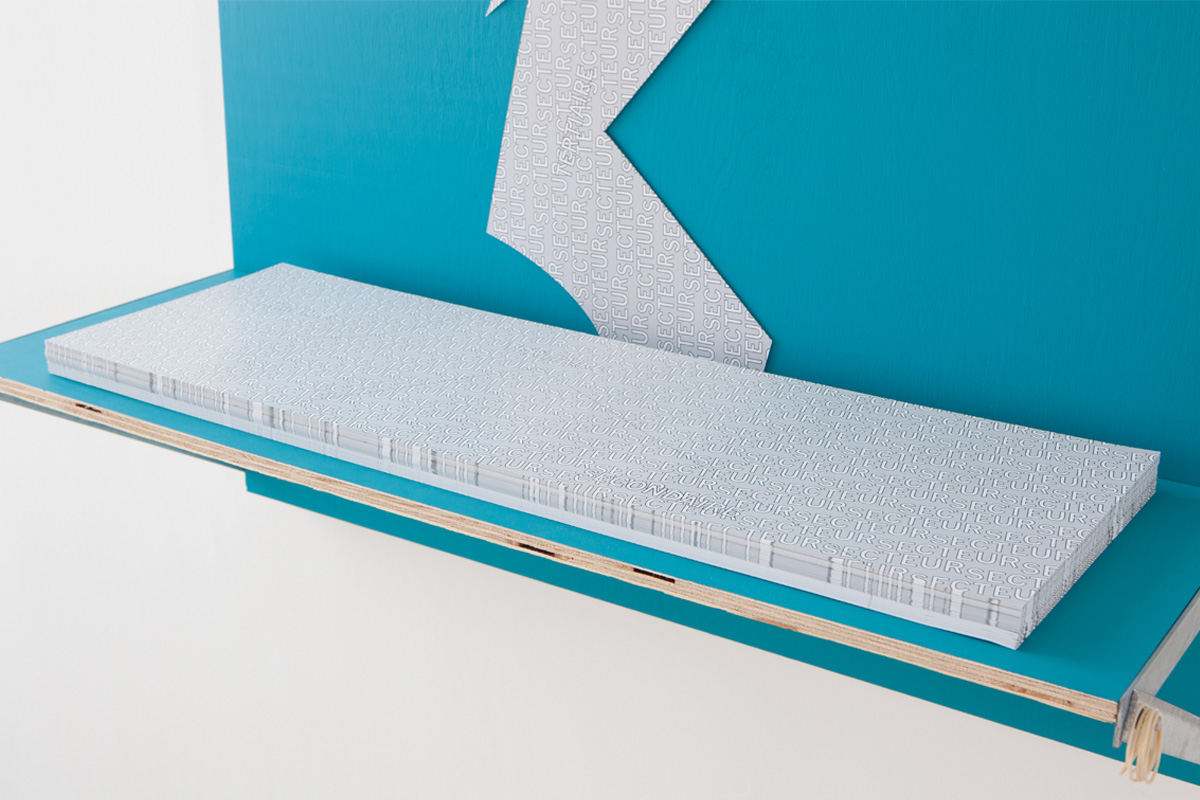 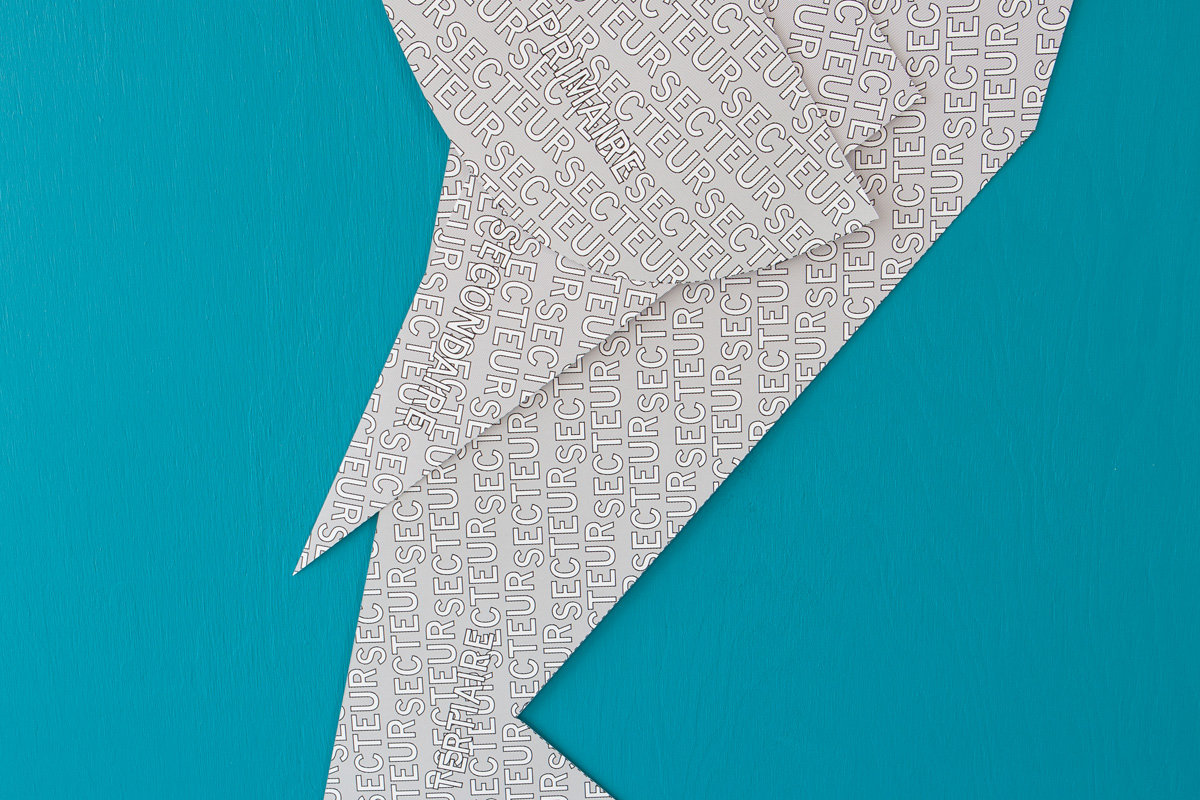 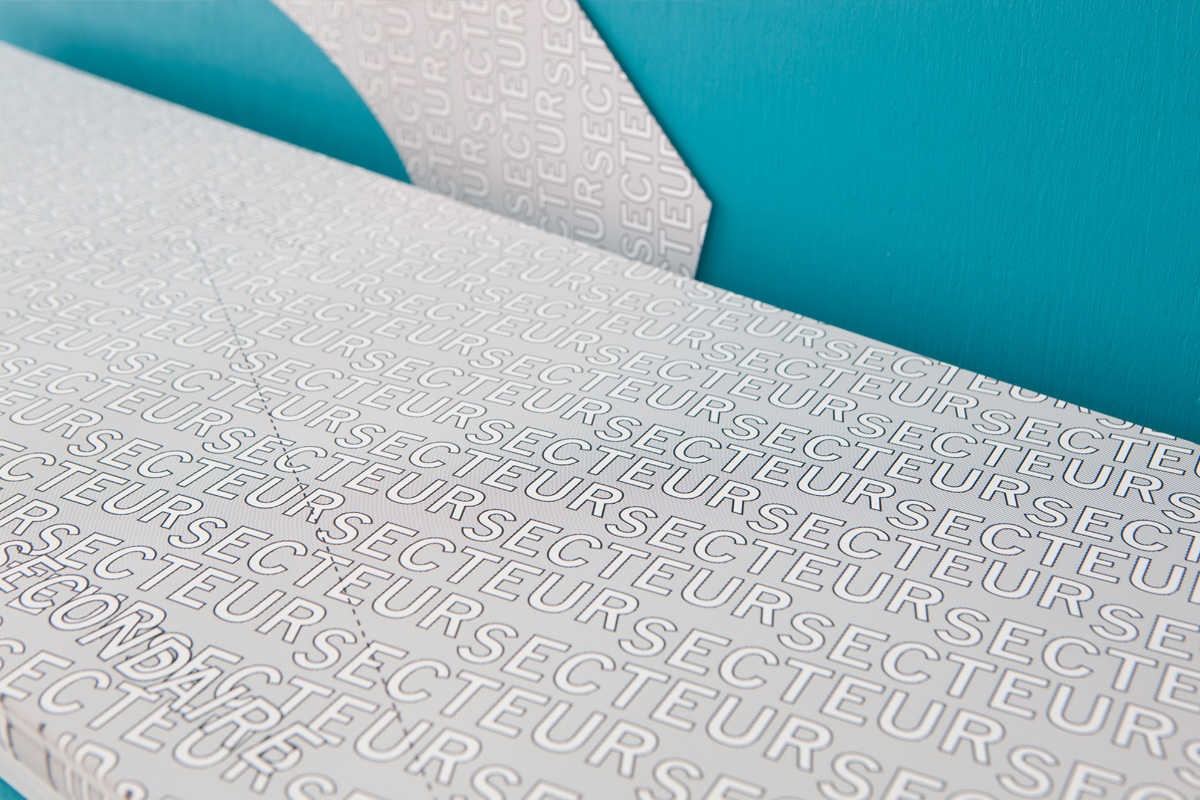 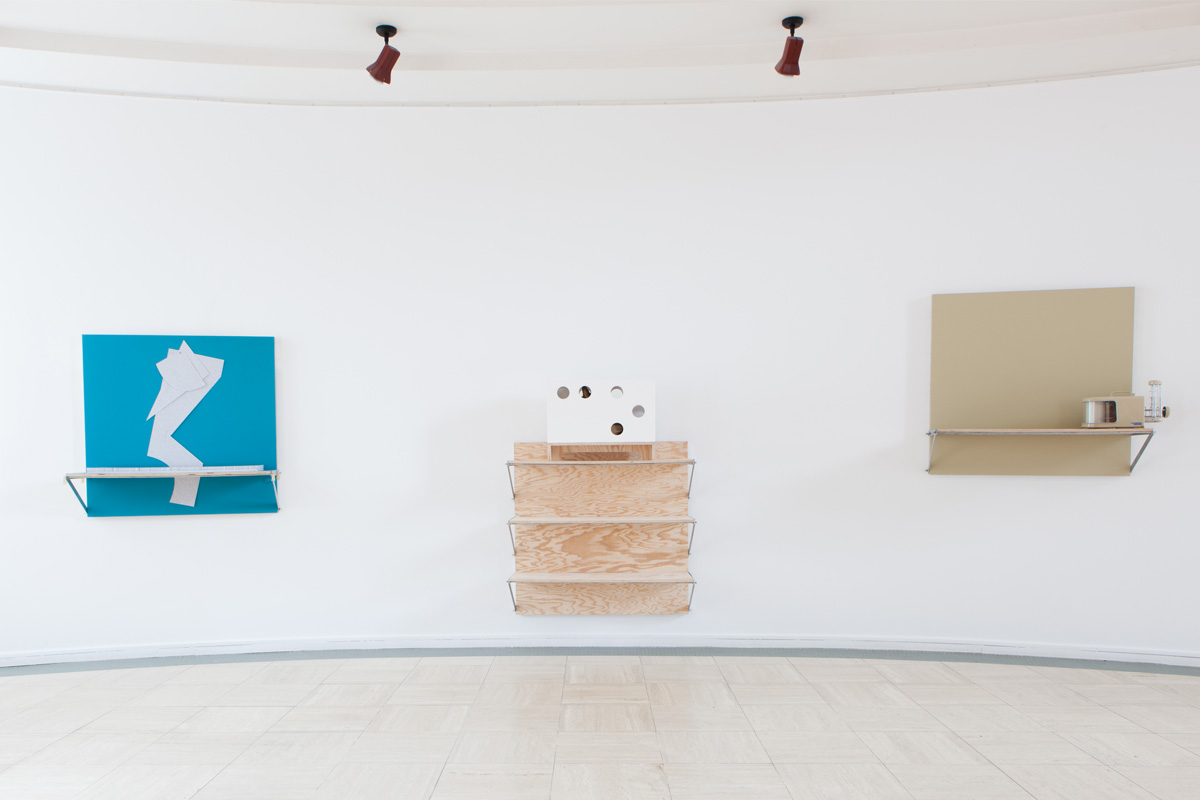 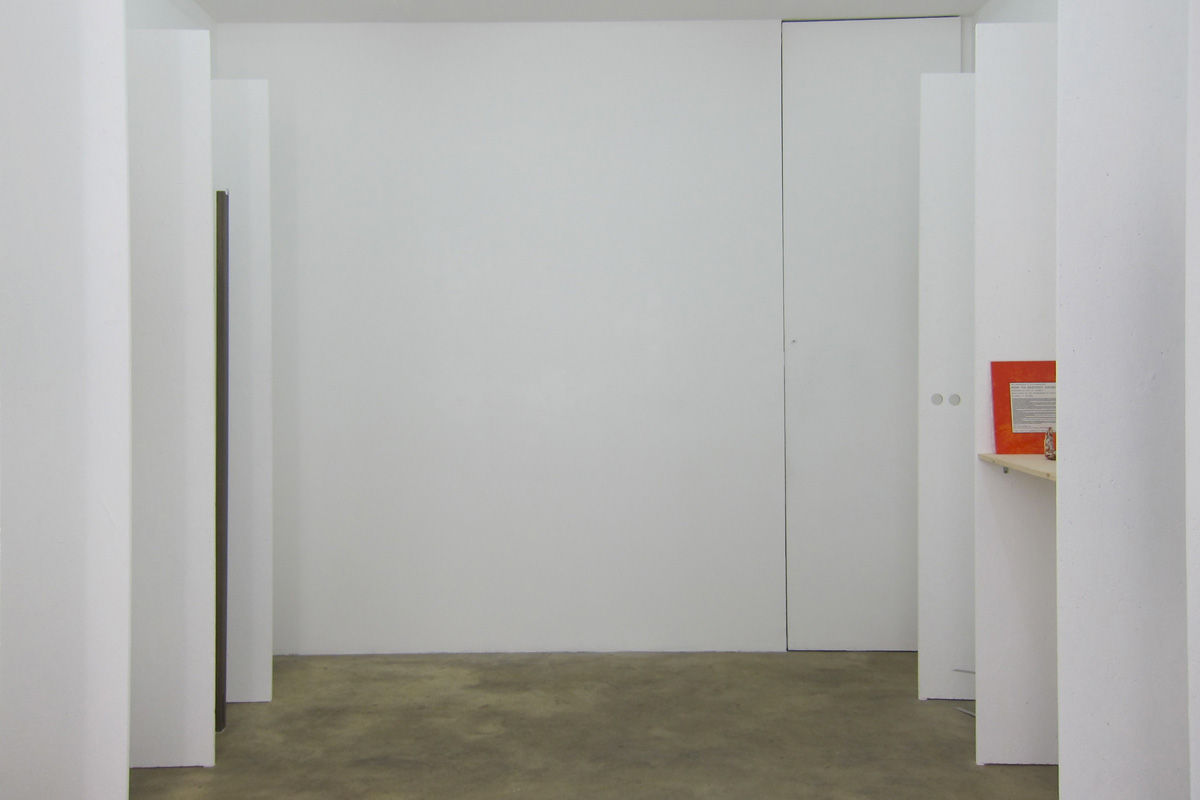 The exhibitions cycle, ‘Plus Une Pièce’, took place from March 15 to May 29, 2014. Tenartists successively showed an artwork in a specific space : a two and a half square metersstorage unit. We have also invited the artists to produce an edition in 25 copies. Only onerestriction : the edition must fit into a C4 sized envelope. A modest container to go along with the storage unit.

A group show, ‘Plus Un Multiple’, presented the editions from all ten artists, and took placeat mid-term of the exhibitions cycle, from April 19 to April 24. A catalogue was published at the end of this experiment, gathering thedocumentation of the exhibited works, texts and interviews.

For this project we intended to create a collaborative workspace where to think about art, outside of market strategies. We are convincedthat this specific context brought on some stimulating works. Elaborating an artwork in a marginal space is definitly grounds for thought.The storage unit as an exhibition space was a humble small-scale area. However, it was located in the center of Paris, at the heart ofthe Marais gallery district. The gap between a raw space and its prestigious location was the touch of humour of this proposition, a wink atthe parisian art institutions and galleries. There was a game to play, a harsh competition; but by creating our own rules and events,we have set up a new deal.

It was, at least, a premise, an impulse, a wish to make things move. The storage unit was challenging : it wassmall, had no electricity, and there was no easy way to display pieces. Nevertheless it enabled to host small meeting groups, and favoured a direct contact betweenthe artist and the visitors.

We wanted to encourage non-conformist exchanges far from conventional openings. We have defended a strong and committedcuratorial idea in an original exhibition space. Come and see, open a door among so many other doors. Here was something that shouldn’t have been there. And yet : it wasan event!

Potential visual evocations is a travelling exhibition printed on a 2,80 x 5 meters curtain.Claude Closky, Lucas Henao Serna, Seulgi Lee, Marylène Negro, Yonatan Vinitskty have been invited to produce a specific work on this medium and to participatein a project which enables works of art to exist and to be presented outside conventional art spaces.This alternative exhibition format, can easily be moved and shown in a number of places with an economy of means.This project is a non profit, the curtain was produced in a single off-sale display copy.This exhibition project is challenging, it questions the access to art, the production of art works and its impact on the public.Potential visual evocations could for example be hanged on a window of a hotel or apartment room, the curtain facing the street to be seen by the passers-by.It might take place in an exhibition space, or in a shop window and why not in the departure hall of a railway station.

This is a 48-hour-art-exhibition.From door to door, from the studio to the gallery, from up close or from afar, fifteen artists are sending us a work of art and the time and means needed to reach us is taken into account.

Folded, rolled, wrapped, boxed, unwrapped, exhibited, as it travels the work of art undergoes changes, takes on different shapes.Short time and limited means are deliberate choices to gather for one single exhibition artists with original and very singular techniques.

From September 6 to September 20, 2014, at Florence Loewy, Toujours + brings together theten artists who took part in the Plus Une Pièce | Plus Un Multiple project.

In this previous series of exhibitions, each at a time, they were invited to propose a specificpiece for an unusual space: a storage unit of 2,5 sq.m. They also had the opportunity toproduce an edition in 25 copies. The only constraint was for this piece to fit in a C4 envelope.

The stance of Toujours + is to organize within a communal time a segmented space. Theartists, now, have to work side by side on 61,5cm of wall. The editions from the previousseries of exhibitions will also be displayed in the bookstore showcases.Still, playing with time and space, what matters is to make the pieces exist. The transpositionof the Plus Une Pièce project in a gallery space is challenging. We’ve decided to address it withan economy of means echoing back that of the storage unit.

We are convinced strong pieces will emerge once again.

As it is often the case with Elsa Werth’s work, a self-referential dimension suggests the conventions of art. Here the labelbecomes the content of the piece as well as its title. But at the same time, the tape can be applied to any context where new meanings emerge. The linear dimension that is characteristicof tape, that links or splits space, is the vector that connects the reference systems of art to the specific nature of an environment. Hence the title-role Topologiede la droite reelle, a “precise definition of the concepts of limit and continuity”. In Elsa Werth’s work it is very often everyday objects that produce articulationsbetween the mechanisms proper to art and the diverse determinations that alter their implications. Art questions our relationship to reality. Conversely objects, such as the shift from one field to another, question theautonomy of the mechanisms of art. Elsa’s scope expands from the artwork on display in the gallery to a practice that unfolds in the public space or in other contexts. ElsaWerth’s exhibitions take place across these different spaces, revealing the continuity and discontinuity in their relationship.

Victory Eraser, a set of 10 office cardboardsleeves with different degrees of elasticity, at a first reading appears like an ensemble of colours and compositions; but the object is suggestive of industrial design and itsusage qualities. In the centre of an exhibition, a carpet rectangle entitled Garde-Titre, Sans Fou, displays an exhibition plan where information is sometimes missing, sometimesenigmatic. These signs are like a game that questions the rules of the exhibition, the variables are the arrangement of the objects, of words, and the movement of people aroundthe space.

Communication tools like invitation cards and editions form part of her work, which stretches and operates outside the domain that is traditionally reserved to the artist.Logically, Elsa Werth’s artistic practice includes projects as an exhibition curator: a cycle entitled Plus Une Pièce | Plus Un Multiple realized in collaboration withMuriel Leray took place in a storage box in Paris. Another project, Potentiels évoqués visuels, which will take place in a variety of places and different contexts, consists of aprinted curtain that will provide a space for all of the artists’ proposals to mingle.

Many elements of the response are to be found in those documents, and must be put into perspective.

From an equality and human rights perspective, there are also problems for some people trying to access health and social services.

We have approached the issue from that broad perspective.

The debate which then started in Europe on the subject of demographic ageing has added to this perspective.

Each one of us came home with new and balanced perspectives on what is important.

The interim population sector perspective plan seeks to reduce the current total fertility rate of 4.3 to replacement level by 2020.

The crisis should also be viewed in perspective.

These clocks are shown in perspective, on a flat surface, one opposite the other.

The Ninth Plan pronounced a 20-year agriculture perspective Plan (APP) to reduce the absolute poverty to 10 %.

His participation assists the deliberations of this committee by bringing the views and perspectives of the controlling shareholder.

Specific actions: support removing obstacles to mobility and enhancing the career perspectives of researchers in Europe.

Third, the authorities propose to put into perspective the development of logistics activity.

To put these economic goals into perspective, here are some EU:US comparative data.

I think it helps put this whole issue into perspective, as difficult as it is.

She must also be able to put things into perspective and stay as objective as possible for the good of her client.

The bill is aimed specifically at enhancing fairness in the military justice system, both from the perspective of the accused person and the public.

Along with other relevant actors, we can participate in designing general strategies and plans of action to respond to concrete issues from a human rights perspective.

It is important, therefore, to put things in perspective and to keep the long view in mind. You can then offer your perspective on the topic to initiate the dialogue.

As in an action movie, expectations of an exciting event are fuelled here, expectations that the viewer will be wrenched from everyday life. The first shot depicts adults and children in a gym, their eyes fixed on a muscular man in front of a mat. The boxing ring in the background and the projection on the wall suggest that preparations for a fight will take place here, a fight based on a media model. A cut leads to the scene of the action, a former factory building in a French city. Pictures of men waiting, busy with their cell phones, heighten the suspense before the fight, the danger of which is announced by a poster with the movie title and metal chains hanging from the ceiling. Breaking with all the spatial, physical and scenic signs, however, the film stops at the meeting of the combatants. The viewer him- or herself is left to imagine what transpires between the two men - quite in keeping with the popular-culture templates shown.

We Do Not Work Alone
mfc-michèle didier